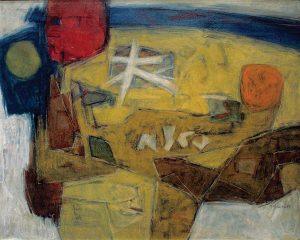 Hale Woodruff, painter, muralist, and educator, moved from Illinois to the Indianapolis area in 1918 and in 1920 enrolled in the Herron Art Institute, where he studied under William Forsyth until 1923. He worked and boarded at the Senate Avenue YMCA, where he met many leading African American artists, writers, and intellectuals, including W. E. B. Du Bois, poet Countee Cullen, and painter William Edouard Scott, who became friends and staunch supporters of his work. After a brief move to Chicago and some studies at the Art Institute, he returned to Indianapolis. Woodruff’s big break came in 1926, when one of his paintings won a bronze medal and a check for $100 from the Harmon Foundation. The Governor of Indiana personally presented the medal to Woodruff.

From 1927 until 1931, Woodruff lived and worked mainly in Paris, where he spent time with Cullen, White, Alain Locke (a professor of philosophy at Howard University), sculptor Augusta Savage, and painter Palmer Hayden. He was especially fascinated and inspired by the paintings of Cézanne and Picasso as well as by African art. In the summer of 1931, Woodruff became the art instructor at the newly formed Atlanta University Center. He developed the program into one of the most influential art programs for blacks in the country, established the first art student exhibition in the library of Atlanta University in 1932, and in 1942 helped establish the Atlanta University Annuals. These were the first national, juried exhibitions for black artists. Cash prizes were awarded and the university acquired works for a permanent collection to benefit the students and faculty of the school. This became one of the largest and most important collections of African American art in the country. Until its demise in 1970, the exhibition was the foremost venue for promoting the work of African American artists in the United States. Woodruff also taught art history classes at Talladega College, in Alabama, and in 1947, accepted an appointment from New York University, where he was professor of art until his retirement in 1968.

Woodruff achieved national recognition for his murals. In 1936, he received a scholarship to study in Mexico City, where he worked for Diego Rivera, preparing the walls and grinding the artist’s colors. Woodruff was hired by the Works Progress Administration to paint murals for schools in Atlanta. His most ambitious and famous murals were The Amistad Mutiny for the William Savery Library at Talladega College (1936–39) and The Art of the Negro for Atlanta University’s Trevor Arnett Library (1950–51). In 1946, Woodruff and his wife settled permanently in New York City and from that time until his death, he was deeply involved with the New York art scene and came to prominence on the world art stage. He was instrumental in establishing Spiral in 1963 and gave the group its name to symbolize the aim of constantly reaching outward and upward. This group of black artists met regularly to discuss art, politics, social causes, and issues related to the black experience in America and their work as black artists.

Woodruff’s works such as Landscape with Constellations reveal his interest in narrative subjects, but also show his experimentation with more modernist modes of painting, including pure abstraction. He also incorporated elements of African art and culture as well as signs and symbols from other ancient cultures, such as Egyptian, Mayan and Aztec, and American Indian, into such compositions.

In her biography of Woodruff, Carrie Jennings wrote: “Landscape with Constellations is also connected to Woodruff’s preparatory studies for the Atlanta University murals and to his interest in the spread of the sun culture. . . . [A] seated ancestral priestess figure, delineated against the yellow tones of a reflecting sun, assumes a frontal pose against the landscape . . . the woman serves in the composition as the pole separating the light from the shadows that form the axis line. A custom among some ancient societies, particularly West African and Melanesian, where an elder or priestess sits on a rock to identify the time for sowing, is suggested here. The sense of patient, quiet, contemplative sacred moment is communicated in a work that is at once abstracted, figurative, and narrative. The world as described in this painting seems alive with spirits, and [the painting] seems to relate to the sowing and planting season, and, thus, to fertility.”

Some Points to Consider